I came across a fascinating deconstruction of the notorious nursery rhyme, Row, Row, Row Your Boat. I hadn’t given it much thought prior; however, I have to admit, it’s been eye-opening!

Before writing this, I did just a bit of supporting research – chalk it up to 18 and a half years of schooling and 3 college degrees – to help substantiate what I’m going to state. Please understand that I’m also going to use a little bit of poetic license, as this is just a wild theory, taking these sing-song lyrics and injecting new life into them, and hopefully lightening the mood for one or two of you, now and again, as your mind wanders “gently down the stream”…

Outside of this being what I’ve already mentioned is a simple nursery rhyme, new information – theory, basically – points to the song’s representation as a motivational mantra. Line by line, I’ll break down the song, and show how a new and unique perspective adds a deeper dimension.

Let’s start with the lyrics themselves (I’m sure I probably don’t need to do this, but humor me!):

Gently down the stream.

Life is but a dream.

Okay, let’s take this one line at a time:

A boat is a mode of transportation that is used when traversing a body of water, right?

What if that “body of water” is the boat itself? Revolutionary? Let me explain!

The human body is over 50% water, roughly. According to Dr. Jeffrey Utz of Allegheny

University, humans, at birth, are 78% water, dropping to 65% at around age one. Adult men consist of approximately 60% water and adult females, 55%. (These percentages vary based on body fat mass, as well as other factors.) Water in the human body is necessary to facilitate digestion, it lubricates joints, it regulates body temperature, it helps deliver oxygen all over the body, it aids in the reproduction and survival of the body’s cells, and it acts as a shock absorber for the brain and spinal cord. As outlined by the Journal of Biological Chemistry, the brain and heart are composed of 73% water, the skin contains 64% water, 79% of the kidneys are water, and the lungs are over 80% water. Surprisingly, even the bones consist of 31% water.

So, taking this idea that “the boat” is, in fact, your own body, this song starts off by suggesting that we move through life with a certain amount of ease, in an effort to ensure a level of self-preservation:

Gently down the stream.

Now that we’ve established that this transportation vessel (i.e. the “boat”) is something of immeasurable value (our own bodies), taking caution on the journey seems to be a no-brainer! And this “stream” – what is that, exactly?

The stream of consciousness, maybe? 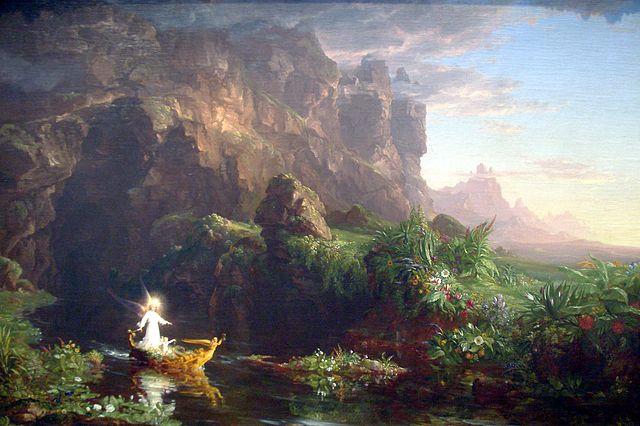 The voyage through life? (The mid-Nineteenth Century artist, Thomas Cole, created a series of art pieces, depicting four stages of life: childhood, youth, manhood, and old age, all taking place in a boat on a river, “the River of Life”, accompanied by a guardian angel.)

Don’t fight against the current (unless, of course, you’re a salmon…), drumming up adversity and difficulties for yourself, risking possible damage and/or jeopardizing the safety of your transportation vessel. Instead, go with the flow…

More to the point, though, the converse:

Not maliciously. Not angrily. Not struggling. Not anxiously.

Chronic stress has been proven to damage the structure and connectivity of the brain. Neuroscientists at the University of California, Berkeley, have presented findings that suggest that young persons exposed to chronic stress are prone to mental problems including mood disorders later in life, as well as suffering from learning difficulties. Reduction in brain white matter has also been linked to continual exposure to prolonged

stress, and such matter reduction results in a change of the flow of electrical signals between neurons and brain regions. The brain’s response to both excitement and stress can, physiologically-speaking, be very similar, some studies show that different subregions of the prefrontal cortex respond differently to negative versus positive stimuli. Furthermore, far too often, excitement stimuli appears to be acute whereas stress stimuli is more often chronic. Without the ability to fight or flee, the “fight or flight” response within the adrenal system becomes torment. I believe it was Shakespeare who said “A tragedy is a comedy misunderstood”. That’s not to say that any of life’s tragedies – the loss of a job, the passing of a family member, devastation due to a natural disaster, etc. – should be viewed as a misunderstood comedy; however, often we dwell more on tragedies than we do on comedies – mulling over the circumstances of a traumatic event long after it has occurred, but allowing a joyful and light-hearted moment to escape like a wave on the shore – and perhaps we should turn this behavior around… We all need to traverse this thing called LIFE more merrily, I think…

Life is but a dream.

It’s time to wake up to the reality of things – this life is temporal! None of us is going to live forever! Regardless of how meticulous you maintain your transportation vessel – and I’m not saying it’s a bad idea; I’m just saying these human bodies of ours were not designed to last forever – or how gentle and pristine the stream you’re traversing happens to be, whether by careful manipulation or sheer luck, just about the only thing we have control over in this life is our attitude! Maybe that’s why “merrily” is repeated F.O.U.R. times – emphasizing the importance of adopting the right attitude as we travel down the stream of life.

So, as you ponder these words in a new light, what will your response be? Follow SMUDGED – A Writer's blog on WordPress.com
Join 367 other subscribers

In Case You Missed It…

What is a Smudge?

In the briefest of terms, I’m just a passing thought, a flicker of imagination, a whisper of suggestion… I’m a shadow in a crowded room, a light fixture around the office, a low hum deep in the subconscious… I’m rather random: light and breezy, plucky with humor, engaging a smile, but then inquisitive, thoughtful, dark, contemplative… I’m a word or two, tossed out to rescue the mind of incessant ramblings; erased, rewritten, rubbed away, and scribed again... A smear on fresh, glossy-white paper, a smudge – a remembrance of that which has been lost to futility…

Smudge (Smudged, SmudgedBlog and all iterations thereof) owns exclusive rights to all content contained within these blog posts, unless otherwise denoted. Writings from this page, whether partial or in their entirety, must not be copied to be published elsewhere, or reproduced on any platform, without prior permission from the author.
%d bloggers like this: